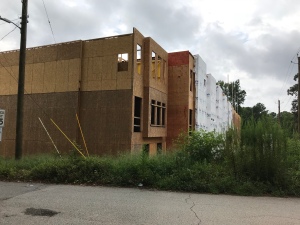 Much of this is from the research presented at the August 2018 meeting by Jay Starkman in the Toco Hills library.

Three properties (single family homes) along Briarcliff were combined to make a single lot. These were purchased and then upzoned in 2006 to create a 19 townhouse development. Neighborhood concerns in 2006 led to concessions and compromise, where the previous developer agreed to numerous improvements including but not limited to: 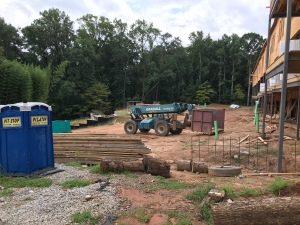 Ground was never broken, and the lot sat idle for 12 years.  Sadly, it appears there were major changes made in 2007 and subsequent years that might not have had the proper public review.  In 2017, the property was transferred to an LLC (recorded price of $2M) and construction began.  With facts on the ground, the county is seeking to get the new plan approved after construction has begun.

Among the problems with the new construction, the following issues have been reported by local resident Jay Starkman during his speech at the August 14, 2018 community meeting at the Avis Williams Library in Toco Hills.  Jay has lived here since the original agreement.

Jay reports that the 2007 plan differs from the 2006 plan in the following ways (all presented at the August 14 meeting):

One thought on “Briar Cove at Stephens and Briarcliff”