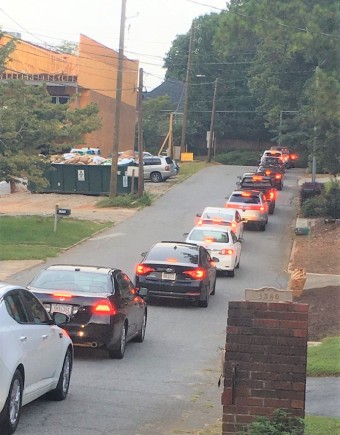 It’s late and I’m tired so here are the Cliff’s Notes.  I am not being objective here so editorial comments will be part of this.  Please add “comments” with what I forgot.

Let me start by saying it was WONDERFUL to meet all of my neighbors out there. What a great group of people. As much as this development stinks, I am so glad we have gotten to know each other better and form a tighter bond as a community.  Let’s keep this up!!!  All of you are awesome and I’m so glad to live in this corner of Dekalb with you!

We were last on the Agenda – at 11:45 PM.  The owner and his architect presented their plans.  We got a chance to respond, but in 10 minutes only 2 people were able to speak.

The Planning Commission discussed the proposal.  It was a disaster. The problem is that the Director of Planning and Sustainability is the applicant. In none of the other 22 previous hearings was this the case – normally it was an owner or developer. So Marian Eisenberg, the Planning Administrator, had been providing the staff analysis of all applicant plans.  But then she ALSO got to provide the “staff analysis” of the Director’s plan. Instead of just providing analysis, she began to rebut, point by point, what the community members had said.  We asked if we could respond to her, but we were told that she was merely clarifying and interpreting, even though there was an obvious conflict of interest as she was ALSO representing the Director.

The architect made it clear – if Dekalb forced him to tear down Building 11, Dekalb will owe the developer money. So Dekalb has a strong interest in not having a fair hearing.

Three members of the council voted to defer to the next cycle, noting that the changes were so major and complex they needed further review.  That motion did not pass with 3 votes.

Then one member said, “Well, since the permits were already approved, then I vote to approve the zoning.”  Her logic was that it didn’t matter if the proper hearings were held or the zoning was ever changed – Dekalb couldn’t fix its mistake. They had to honor the permits. Of course, suppose Dekalb had approved a toxic waste dump without rezoning. Would she argue that had to be built as well?  She motioned to approve (why hold a hearing at all then?).  This lady also somehow missed that the rezoning request was for the WHOLE PROPERTY, and only 11 permits were issued so far.  So she could fully deny the other 8 – but she didn’t explain her logic or reasoning.  Only 1 other board member agreed with her argument that you could have a legal building permit without legal zoning changes and that if 11 are approved you have to approve 8 more.  So that motion didn’t pass.

At that point many of us questioned why Marian Eisenberg got to sit on the stage and argue for the applicant.  Why wasn’t she in the audience standing at the podium speaking in her 10 minute slot as a representative of the applicant?  Then we could have proper rebuttal from the community.  The problem was that she was both Planning Administrator, and representing the Director of Planning.  No other developer or land owner got to sit on the stage with a microphone and give their interpretation of zoning law on their own motion.

One example – Marian Eisenberg said they “had to widen the units to comply with square footage for zoning”.  That’s her interpretation.  But then why not reduce the total number of units?  She was treating the 19 units as if they were non-negotiable, a position that would be for the developer to take, not the zoning administrator.

One more interesting sticking point.  In the August meeting, Marian Eisenberg told us that GDOT had not approved the right hand egress to Briarcliff.  She said she had heard them say it.  At this meeting she was asked, “What documentation or study do you have from GDOT?”  She then admitted – she had a conversation.  And… most critically, she couldn’t remember if the conversation was with GDOT itself or with the developer sharing his recollection of what GDOT had said.  We have nothing from GDOT stating that Stephens Drive can handle another 38 cars entering 100 feet from Briarcliff, nor anything saying that Briarcliff CAN’T handle these 38 cars coming in from Briar Cove.

So there you have it – Dekalb planning in a nutshell.  They approved building permits without proper zoning review.  When called on it, they get to make their own application to fix their mistake, and then get to interpret the zoning rules on their own application.  Even the lack of notice – 5 days instead of 15 days.  Who gets to interpret if that’s legal?  You guessed it – Marian Eisenberg stated that it was the prerogative of the Director to waive the 15 day requirement.  Meanwhile, there has been no GDOT review.  See the black SUV backing into traffic?  That’s 1 car.  The new townhomes will bring about 37 more cars doing the same thing every morning, just 100 feet from an intersection.  It is insane that Dekalb is approving this major change without any traffic study, and relying upon the memory of the applicant’s representative herself as to where she heard GDOT’s opinion.

The request was made to delay the Board of Commissioners meeting due to the Jewish Holiday on September 25.  We were told that they would discuss deferring the September 25 meeting AT the meeting on September 25.

So no recommendation from the Planning Committee… please add comments with what I missed.