We had a meeting with the developers and our commissioners on September 18 , 2018 at noon at the Manuel Maloof center to discuss the Briar Cove/Emory Cove development at Stephens and Briarcliff.  These are my notes from the meeting.

We greatly appreciate the time and effort that the Commissioners are putting into this issue.

Three primary issues were discussed – egress to Briarcliff, violation of the setback, and the detention pond.

Commissioner Rader assigned the county to pursue clarification from GDOT to see what could be done to make Stephens remains a usable street for the Residents of HASoBi.  The 2006 plan included egress on both Stephens and Briarcliff (left only on Stephens, right onto Briarcliff).  We mentioned that if the 2006 plan should be modified, it should be to remove the Stephens Egress, not to remove the Briarcliff egress!  Commissioner Radar has requested GDOT to study to see if (A) an acceleration lane can be added to Briarcliff to enable right turn out egress and (B) if a stoplight can be added to Stephens/Briarcliff.  This may take beyond the time for the next planning meeting on Sept 25, and will likely push this issue to October 23.  It isn’t going through another full cycle review however. 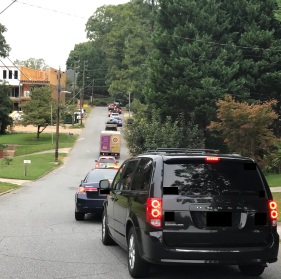 Regarding the setback, Commissioner Rader was very clear that there was no zoning allowed for a decreased setback.  The developer had received false information from the Planning Department, and the Commissioner was obviously upset at the state of affairs, commenting, “I hate that this is what happened”….”They gave you the wrong answer, the Department misapproved it”.  Valentin commented that he is paying for someone else’s mistake, but Rader reminded him that he had failed in his due diligence to look at the zoning himself.  He took the planning department at their word, and did not independently verify the zoning.  Therefore, the fault is on the developer for failing to do his due diligence, and possibly on the seller of the property for not disclosing the shenanigans on the zoning.  That’s not for me to decide, but for Valentin Ciuperca and seller Eitan Varon to figure out.

The developer noted that he could plant a tree or add some bushes to cover up Unit 11, but Commissioner Gannon noted that no amount of trees or fencing could cover up the townhouse sitting within the 60 foot setback (see above with unit 11 sticking out).  Even allowing unit 10 is an indulgence to the developer as it sits 2 feet inside the setback, but it is clear that unit 11 is in violation of the zoning and must be torn down.  This writer’s opinion – if that is allowed to stand, then hundreds of homeowners in Biltmore Estates will be entitled to build extensions of their houses onto their front lawns, and they will be justified in demanding the zoning based on precedent.

We also discussed the detention pond.  Valentin assured everyone it was working, and as of today (9/18) was dry.  When I got home, I took a photo and found it was still holding water more than 48 hours after a light Sunday rain (and after weeks of no rain).  Obviously, the detention/retention pond is still broken, and needs to be fixed.  We also discussed the mysteriously moving creek that turned from creek to drainage ditch.  Apparently, the location of the creek is not determined by Dekalb County, but by the developer himself who hires his own engineer.  The engineer’s reputation is what establishes the topography and watershed of Dekalb, but of course, he also likely knows that nobody ever double checks on the work he does.  We did get a commit from Parag Agrawl that they will look into this, but not sure if that means there will be independent review.  In any event, the pond, now built, isn’t going anywhere.  But it will be on DeKalb to make sure it functions properly.

The meeting on 9/25 is still happening, so the neighborhood should be sure to attend.  Note to Orthodox Jews who can’t attend on the holiday – we are at the end of the meeting, so you can drive over once it is dark.  It is very likely the final decision will be deferred to 10/23, but it is important we have people at this meeting to show we are still engaged and interested.